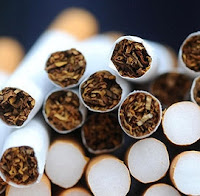 Luckily, most of pipe tobacco manufacturers offer similarly branded filtered cigars. To be honest with you, I don't know if smoking experience remains the same, but it's worth trying a filtered cigar considering that a carton of cigarettes is 5 times more expensive.
Posted by TobaccoGeneral at 10:15 AM